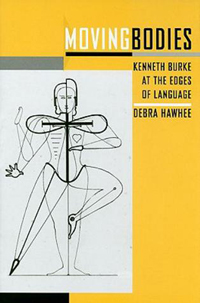 Debra Hawhee’s book Moving Bodies: Kenneth Burke at the Edges of Language develops the only comprehensive examination of the role of bodies in Burke’s rhetorical theory. For Burke scholars, this fact alone makes this book a significant contribution to the continuing conversation that Burke initiated. In addition, Hawhee argues that the broader field of rhetorical theory must re-focus on the body in order to account for the complex interaction of language and material in each rhetorical situation. This book constructs an argument for and a performance of body-focused rhetorical analysis.  Through her body-focused analysis of Burke, Hawhee illustrates how refocusing on the body in rhetoric can add new depth and complexity to our understanding of rhetoric and rhetorical theory.  For an audience of Burke scholars and rhetoricians in general, this book reminds us that the body is the foundation of rhetoric, and that we create new perspectives to understand any rhetorical situation by paying close attention to bodies.

Burke’s employer, Colonel Author Woods of the Bureau of Social Hygiene, was a significant ‘body’ outside Burke’s text that influenced Burke as he formulated his method of counter-efficient scholarship and perspective of incongruity. Hawhee explains that the Colonel represented the counter-Burke, about whom Burke once claimed “it would take a life time to explain the damages and rewards” from working with Colonel Woods (61).  Woods was efficient, serious, and bureaucratic (62). He promoted the training of efficient disciplined bodies in order to create efficient social organizations. Colonel Woods held an unwavering conviction that drugs, of any sort, are evil, in part, because they drugged body was an inefficient, uncontrolled body (69).

Hawhee explains Burke’s reaction to this professional relationship: “the counter-efficient style of scholarship no doubt made more explicit to Burke through his oppositional relation to Colonel Woods” (74). Burke develops his counter-efficient style of scholarship, in part, as a reaction to the ‘efficient’ bodily mannerisms and convictions of Colonel Wood. Burke saw this type of efficiency as a form of mental gridlock. Burke advocates for a ‘counter-gridlock’ that would allow the mind to “go every which way” (64). This counter-gridlock thinking appears as the key term ‘perspectives by incongruity’ in Permanence and Change and Attitudes Toward History, the books that Burke wrote during and immediately after his employment at the Bureau.

Hawhee’s chapter “Body Language: Paget and Gesture-Speech Theory” focuses on the bodies within Burke’s texts in order to explain how Burke configured the body/language dualism.  Hawhee traces out numerous locations where Burke invokes gesture-speech theory. Hawhee argues, “attention to Burke’s Pagetian side will show… that attitude both stems from and manifests in generative, connective, bodily movement…. Burke’s addition of attitude brings with it the crucial mind-body correspondences that his theories honored all along” (108). Gesture-speech theory draws on physical science and evolutionary theory to argue that language evolved out of a foundation in the body and gesture (107).  Burke developed an interest in Richard Paget’s gesture-speech theory early in his career and continued to incorporate the concepts into his theories of dramatism and symbolic action.

Burke uses gesture speech theory to demonstrate that bodies have a formative role in the ‘linguistic dance’ of meaning and attitude (117). Bodies do not simply produce the sounds necessary to speak and convey meaning. The body also performs the attitude motivating the speech act. The physical cues made by the larynx and mouth, which he calls ‘tonal gestures’, convey meaning and attitude that may or may not correspond to the logic of the words alone. In Philosophy of Literary Form, Burke writes, “The Paget theory of ‘gesture speech’ obviously makes a perfect fit with this [theory of drama] perspective by correlating the origins of linguistic action with bodily action and posture” (121, in Hawhee). Hawhee stresses that Burke’s interest in gesture speech theory should remind rhetoricians that “communication is difficult to separate from language’s materiality, which is never far from communing, communicative bodies” (124).

The final chapter, “Welcome to the Beauty Clinic”, is likely the most useful for rhetoricians interested in the connection between bodies and rhetoric because Hawhee performs the most body-focus method of rhetorical analysis, which she calls a body biography. In this chapter, Hawhee creates direct connections between an analysis of Burke’s physical condition and his intellectual progress on the Symbolic of Motives. Until this point, Hawhee has performed a rhetorical method that connects Burke’s writings to the bodies in Burke’s life. She has also performed a method that connects Burke’s writings on bodies and his writings on language. In this chapter, she moves language and bodies even closer by making the most direct connection between bodies and language. Hawhee explains the method is to “examine how two bodies – the body in theory and Burke’s own ailing body – both sculpted and stultified his writing during this period [1950’s]” (129).

She opens the analysis by discussing Burke’s various ailments and then connects those ailments to Burke’s developing thinking on bodies and symbolic action. His abuse of alcohol and ongoing respiratory ailment hindered the flow of his ideas. These physical conditions affected his process of writing, creating starts, stops and interruptions. His writing stops and stumbles like the Gaspo-Gaggo-Gulpo of his lungs struggling to breath. Both of these physical ailments led Burke to return to thinking on the body in further depth. Hawhee explains, “Burke’s relationship to his ailing body, as evidenced in his painstaking account of his symptoms’ correlation – indeed, response – to the flow of ideas, approximates....a belief in the transformative power of illness” (134). She then connects these physical ailments to how Burke develops four different bodies of catharsis – bodies that purge, bodies that laugh and cry, bodies of the crowd, and bodies as part of ecology - in “On Catharsis or Resolution” a piece of writing that was intended to contribute to A Symbolic of Motives, his final major book project. Hawhee explains that these bodies and Burke’s own body remind him of the ‘deathiness’ that “paradoxically binds and divides bodies and language” (146). Without bodies, language may be pure and essential, but it would also be dead and empty. Bodies give language life, vivacity and through the birth and death of new bodies, language builds and grows.

Hawhee does not simply urge rhetoricians to focus on the connection between language and body; her entire book performs body-focused rhetorical analysis. This focus on the body is most clear in “Welcome to the Beauty Clinic”. In Moving Bodies: Kenneth Burke at the Edges of Language, Hawhee effectively argues for a rhetorical analysis at the intersection of language and bodies. The book functions as a performance of a rhetorical analysis that connects bodies and language. By connecting Burke’s ideas to the bodies surrounding the texts, this book breathes fresh life into Burke’s words. Before publishing Moving Bodies, Hawhee states, “It would be incumbent upon Burke scholars to take seriously Burke’s terms and turns and look into their conditions of emergence” (Burke on Drugs, 1). Moving Bodies represents the most extensive example connecting Burke’s terms and turns and their “conditions of emergence”. In this case, the conditions of emergence are the bodies in the text, the bodies influencing Burke’s ideas, and Burke’s own body as he develops his theories throughout his life. Hawhee’s argument and performance in this text remind scholars of rhetoric to pay attention to the bodies that give language life, movement and energy.

* Patricia Fancher is a PhD student in the Rhetorics, Communication, and Information Design program at Clemson University.