Michael Burke forwarded to us an online review of Swan Dive by Teri Davis. Here are excerpts 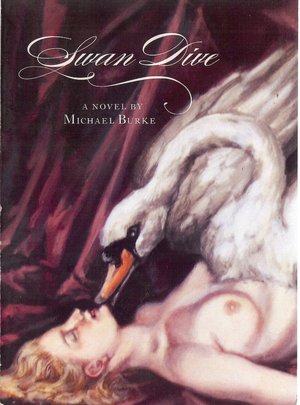 Below is the review for Swan Dive. I loved it.

If you were a private investigator, would wonder about a family relationship if a wealthy father hired you to investigate his only son's possible affairs? Added to that, the son is engaged to a wealthy, educated, intelligent, and beautiful woman who appears very proper. Why would he chance that relationship for a one-night stand, or is there another woman who means more to him?

Most private investigators have relationships with local law enforcement officials and apparently the local police recommended this family to use Blue. Blue has formerly been a part of the local law enforcement. Since he needs to pay his bill, Blue quickly agrees. However he soon realizes that even though the family can afford to pay him, they haven't been completely honest with him and want their own secrets to stay hidden.

Johnny 'Blue' Heron decides to take the case but wonders abut the family when the fiancées father temporarily bullies him into his personal limousine and offers to pay him off if he drops the case. Huh? Her own father apparently does not want Blue investigating his future son-in-law. Why does it seem like the wrong families are investigating the wrong people?

Do the priorities seem a little confused? That is exactly how Blue feels throughout this investigation, which has a variety of twists involving numerous crimes, including embezzlement, perjury, incest, and murder. As Blue discovers more truths, the problems tend to grow geometrically.

While 'Blue' is wondering and investigating these bizarre relationships, he unfortunately discovers the son's dead body. Was he having an affair with this woman? Was he poisoned? How? If there was poison wouldn't others at a party also possibly be endangered?

Swan Dive is seen through Blue's point-of-view. His eyes, while wandering to attractive females, always deceive him when it comes to meeting attractive women. Blue's persistence and curiosity are his traits that are the driving force throughout the novel.

In the case of Swan Dive, good reads do come in small packages. The only flaw was in the shortness of this precise gem. As a reader, you are constantly wondering what Blue will find out the strangeness of the situations for whom he is working.

Michael Burke shows his artistry in literature with his first novel, Swan Dive. He definitely has a varied past from being Harvard graduate, being in the army, working as an astronomer, studying urban planning, and finally becoming an artist through painting and sculpture.

The Music of the Spheres will be the next book in the Johnny 'Blue' Heron series. It is due to be published this year.