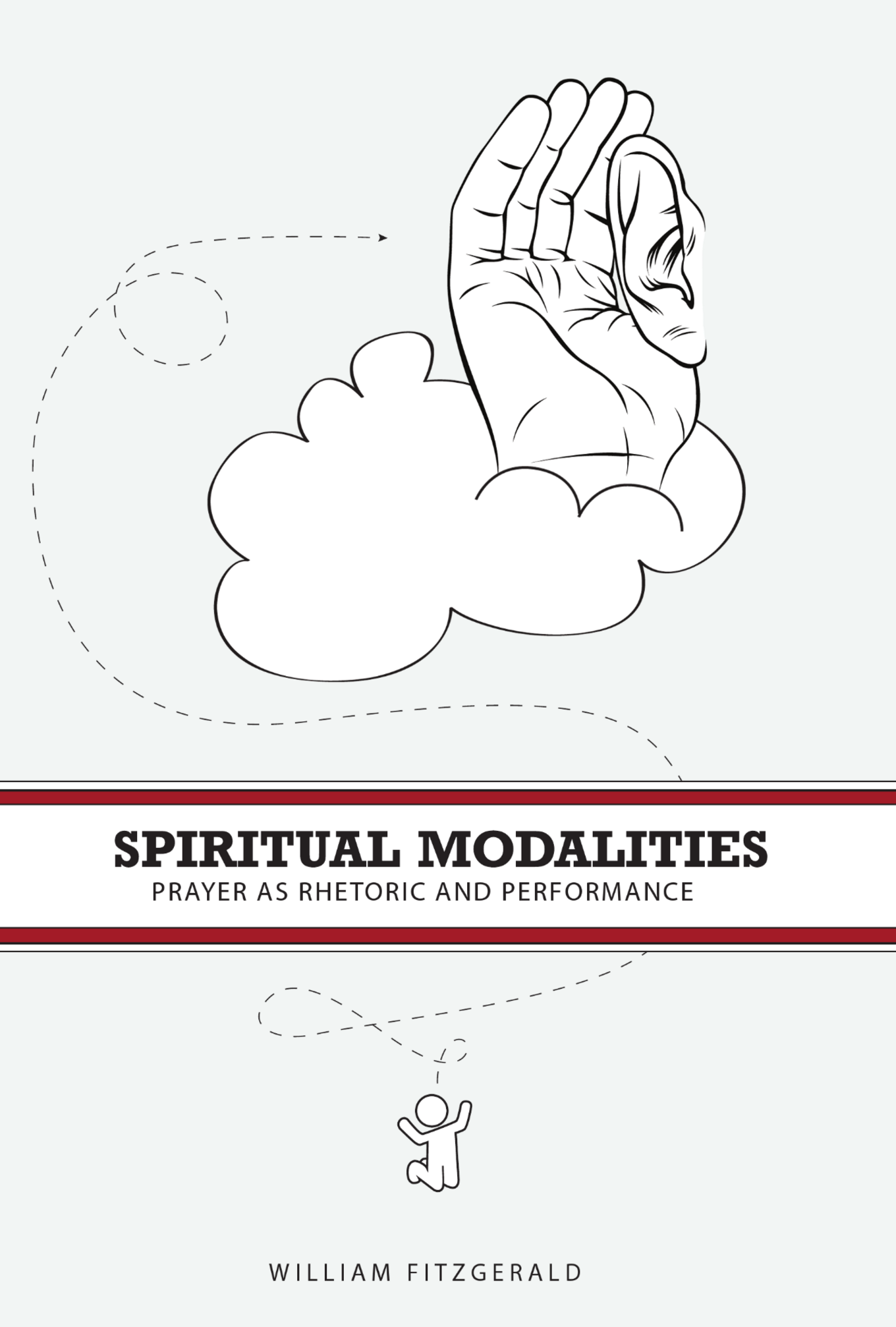 Spiritual Modalities is arguably the first major work to take up the high theoretical questions of rhetoric and religion since Burke's Rhetoric of Religion published more than half a century ago. While a number of other studies deal with the relationship between religious discourse and other phenomena, such as politics, social movements, or particular rhetors and periods, Spiritual Modalities makes a strong claim to understand the primeval stuff of prayer's varied and complex discourses. As Burke writes: "we are to be concerned not directly with religion, but with the terminology of religion" (vi). So Fitzgerald is not concerned with prayer as an efficacious means to access God, but with prayer as a discourse with motives grounded in human experience. Fitzgerald's contribution deserves praise, then, by virtue of its very manifestation in our literature, for it engages broadly and deeply the discourses of prayer in their complexity, situatedness, diversity, and embodiment. In order to cover this broad ground, Fitzgerald employs Burke's pentad, which is an appropriate choice because it provides a natural vocabulary for the various and compelling motives that undergird the discourses of prayer. Fitzgerald focuses primarily on three of the pentadic elements: scene, act, and, the belated sixth, attitude. Prayer, Fitzgerald affirms, is a fusion of "distinct, though interrelated, elements of discursive performance expressible as a 'scene of address,' an 'act of invocation,' and an 'attitude of reverence'" (7). These three essential elements then serve to guide the overall structure of the book.

Fitzgerald's first two chapters consider prayer not only as an oral or textual discourse, but also as a kind of temporal berth. More than the mere result of a rhetorical situation, prayer is, in some sense, the situation itself. It is simultaneously a place, a time, a relationship, an act, an attitude, a response, a provocation. In pursuing this line of reasoning, Fitzgerald engages in dialogue with the quickly growing literature on the intersection between space, time, and rhetoric. Prayer plays a potentially important role in this literature, because it explicitly signals a removal from time and a ritual encounter with the occasional. Drawing on the classical notions of kairos and krisis, Fitzgerald sees prayer as a means to create openings of meaning in the chronic everydayness of life (15). These kairotic openings then function as "performative spaces in which human and divine communication occurs"; they provide a space of "retreat and recalibration in which aspects of communication and performance (such as ethos and agency)" are rehearsed and practiced (22 parentheses in original).  Fitzgerald supports these claims by performing a reading of Reinhold Niebuhr's "Serenity Prayer," a prayer-text that explicitly and complexly plays with notions of kairos (timing) and krisis (judgment) whereby the supplicant rehearses important and situated practices for living free from addiction.

Chapter 2 in particular reads prayer as a "scene of address" (8). The important Burkean ratio here is scene-act. If scene is a matter of relationships, as Burke affirms, then prayer must be a discursive means of negotiating those relationships. Fitzgerald points out that divine beings vary widely, but the kairotic nature of the human-divine relationship has certain essential and generalizable characteristics. (Fitzgerald is careful, I should add, to point out where there are meaningful exceptions.) Prayer, in short, is a performative space. It is an opening in time within which supplicants perform their relationship with the divine. In Chapter 3, Fitzgerald outlines how this space is to be negotiated and sustained, focusing specifically on the act of invocation. Fitzgerald argues, contra-convention, that prayer's "performative core" lies in invocation, not in petition or praise (53). The speech-act of invocation is the primary complement to the kairotic scene of prayer discussed in Chapter 2.  To put it another way, an invocation is an act of prayer designed to create and "realize the potential of (the scene of prayer)" (54). In this chapter, Fitzgerald performs a series of short close readings through we which he illustrates a number of important characteristics of prayerful invocation. He discusses, for example, the importance of naming the divine. He discusses the role of accumulation and repetition of the invocation, which is a way of keeping the kairotic space open. More even than in the preceding chapters, Fitzgerald uses Chapter 3 to illustrate the collapse of text and context in the act of prayer, paying special attention to prayer as "an unfolding drama of divine-human relations" (54).

Chapters 4 and 5 complete the Burkean theoretical arc by discussing the "attitude" of prayer, which is a performed reverence, and conceptualizing prayer as a "rhetorical art of memory" (9).  Prayer as attitude and art suggests overlap with the young subfield of embodied rhetorics. Fitzgerald talks about the "dance of attitude," a notion that prayer is often an embodied signification of the reverence discussed above. A supplicant extends arms or clasps hands, stands or kneels or lies prostrate, moves or reposes, lifts the head or bows the head, and so on (see p. 77). Fitzgerald is especially conscientious here to embrace the full diversity of prayer's symbolic gestures. He asks provocatively: "Is prayer, finally, a form of address to specific beings apprehended as divine? Or is it a manner that infuses various modes of performance with an ethical dimension? Can recycling be prayer?" (83). Fitzgerald suggests in the conclusion that the answer to these questions tends to the affirmative. Prayer wears many "guises and disguises," and it "manifests a powerful complex of motives driving human action" (137). Far from watering down the theory Fitzgerald is building, the broadening of prayer as a discursive genre seems to lend density and vitality to Fitzgerald's claims.

Readers of this journal will like to know that Kenneth Burke plays a starring role in Fitzgerald's work. Burke is more than just the source of a useful heuristic for Fitzgerald. For just as Burke saw God and religion as somehow implicit in all of language, so Fitzgerald sees prayer as a central origin and destination for the art of rhetoric. "Indeed," he writes, "one can go so far as to claim no other discourse realizes ideal communication more than authentic acts of prayer" (5). And he further believes (with Burke) that as rhetoric discovers or rediscovers certain terrain, such as the physical body, it will naturally also rediscover prayer (see e.g. 77). This central argument – that prayer is a kind of essence of rhetoric – ties back to Fitzgerald's claim that prayer is a kairotic, meaning-making act in the midst of chronic meaninglessness, the implication being that rhetoric can be described in the same way. For Fitzgerald, not only is prayer rhetoric, but rhetoric – or as he puts it, "the perfection of the rhetorical principle" – is prayer (97).

I appreciate Fitzgerald's willingness to go boldly. I believe his sensitive, elegant analysis as well as his deep grasp of both the discourse of prayer and modern rhetorical theory uniquely qualify him to make the arguments he makes in this book, which is why I at times wanted to hear more from him and less from the chorus of philosophical voices he brings into the book. In Fitzgerald's push to justify the ways of prayer to rhetoric – that is, to demonstrate prayer's inherent rhetoricity – he engages with such a robust set of interconnected theories and literatures that his own central contribution gets overlooked at times. In Chapter 3 alone, which consists of eighteen pages devoted largely to small critiques, he still finds time to put Burke, Buber, Bakhtin, Culler, Levinas, Derrida, Marion, and the Rhetorica Ad Herrenium in conversation. Fitzgerald is a responsible and conscientious critic and theorist, so he does not do damage to the literature, but his heavy use of it occasionally inhibits his ability to throw his own contributions into relief. That being said, I can hear another reviewer inevitably complaining that Fitzgerald did not cite so-and-so, and needs to read so-and-so, a refrain we read in many peer and book reviews. So Fitzgerald's heavy use of other literature may have been a preemptive response to such moans. Nevertheless, it was at times difficult to know where a given theorist ended and Fitzgerald began.

Fitzgerald's voice is especially backgrounded when Burke is in the room. On this point, I give Fitzgerald the benefit of the doubt. The great premise with which one must contend in considering Fitzgerald's argument returns fundamentally to Burke – Burke, who increasingly throughout the book becomes a kind of oracle to whom Fitzgerald seems to serve as disciple. This statement, I fear, could be misread to mean that I see Fitzgerald's work as obsequious. Not so. Fitzgerald does what any good disciple does. He takes the essential tools of the oracle and refashions them for a new audience. He uses them to invent artful and fertile new ground with new relevance for a new generation. Burke, like Fitzgerald and, for what it is worth, like the author of this review, sees in religion and prayer the archetypes of culture and discourse – the living, breathing, meaning-making life forms of language and identification. Prayer is "the ultimate reach of communication between different classes of beings" (Burke qtd in Fitzgerald 97). It is the uttermost of discourse. I could revisit my small protest and ask for less Burke, more Fitzgerald, but from the waters of Burkean theory, Fitzgerald blazes lovely theoretical paths. And for what it is worth, Fitzgerald does a particularly good job of articulating his contributions when he gets to the last chapter of the book, a conclusion in which he eloquently argues that prayer "has a prayer" for our time. Fitzgerald's essential insights on prayer's relationship to kairos and space, address and invocation, attitude and reverence, body and memory, technology and motion, are hardly trivial addenda to Burke's work on rhetoric and religion. Fitzgerald's book is nothing less than a comprehensive twenty-first century theory of the rhetoric of prayer, and it persuasively argues prayer's relevance in twenty-first century discourse generally.

Burke, Kenneth. The Rhetoric of Religion: Studies in Logology. 1961. Berkeley: U of California P, 1970. Print.